Difference between revisions of "Invasion!/Chromarans:Profile"

From All The Fallen Stories
< Invasion!
Jump to navigation Jump to search 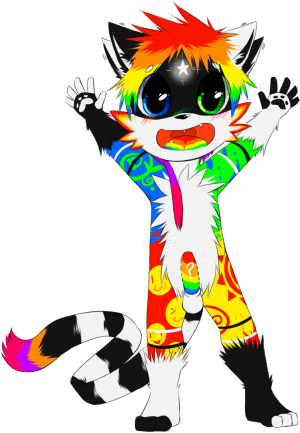 The Chromarans (singular Chromaran) are a very strange race, as their biological make up seems to be a unique blend of plant, fungi, animal, algae, myxomycetes and bacteria with some technological component. They were discovered just about ten standard years ago, and only recignized as sentient species and therefore members of the council five years. Their exterior form resembles terrestrial bipedal or quadrupal brightly colored furred Humanoids most of the time. They are exclusively male. The singular bodies of the Chromarans are actually just Sporocarps of a now singular entity that once was comprised of two beings. Their native planet of Chromar (CROWMUHR) is located near the center of the galaxy, in the last stable orbit around the Black hole 7α-93.5zx.Ξp6.qh2.6Δe.01Ω, also called "RunixHalo" by the Chromarans or "Sagittarius A*" By Hu-mans, and is rumored to be the dumping ground for waste and illegal experiments for centuries. Due to these factors it has a much higher gravity than Earth's at 14.6752G, a much thicker nitrogen-oxygen-fluorine atmosphere at 9.4672 atm, and experiences massive temperature gradients from 148.8K on the low end to 109C at the high end As a result of these conditions they are extremely strong physically compared to humanity.

Due to their ability to shapeshift, a comprehensive list of abilities is currently impossible

The most obseverved forms of the Chromarans are surprisingly human in appearance. They have two arms and two legs with five digits on their hands and feet, just like humans. They walk with a upright, bipedal, plantigrade gait like humans. They have a single opposable thumb on their hands, and possess Feet- and Pawpads. They have two eyes and a mouth like humans, and possess wet mammalian noses and atleast two ears. Their eyes have a visible black pupil and a colorful hexachromic iris. They are brightly colored furred, and possess a similar colored epidermis .

Chromarans reproduce sexually, and have a single, Male gender. The Chromaran penis is, depending on both the form of it and the Chromaran, either retracted into the body, but extends from the body when they are sexually aroused, or is visible from the outside and erects at the event of sexual arousal. Chromaran sex is very similar to human gay sex. They have similar sensations and enjoy orgasms just like humans do. Upon orgasm a Chromaran will poot, ejecting millions of spores into the surrounding environment. To reproduce the Chromarans use spores, mostly contained in their cum, albeit they can be emitted from every orifice on their bodies. The Spores are highly resilient against radiation, chemicals, other microorganism, heat aswell as cold and other environmental influences. They can therefore grow practically anywhere, although they prefer a very nutrient rich and moist environment, such as the inside of bodies. If injected into a host through whatever orifice, they will transform it into a Chromarans sporocarp aswell as causing it to bear offspring. First the hostbody will undergo full transformation into a Chromarans sporocarp in the span of 72 hours, then a softshelled egg will develop in the now fully adapted sporocarps rectum, which willl be expelled approximately 1 week later. the Egg will continue to develop for another week until ripping open and releasing one cub. The cub will seek out the nearest form of high density nutrition and start development until its fully matured after one more week. If expelled outside or if the host is killed but not completely destroyed, the spores will establish themselves as a plantlike organism, conveying the egg as its fruit. after this the egg and cub will proceed to develop normally to completion.

Chromarans Sporocarps stop aging after they have reached full maturity during the course of 1 week.

Chromarans are omnivores, for the lack of a better term. they can digest basically anything that contains carbon, possibly excluding diamond. They can also derive nutrition from photo- and radiosynthesis

The Standard Chromarans sporocarp has all five basic senses, although strength, precision and bandwith are not standardized

Chromarans have a very easy time making themselves appear human due to their Shapeshifting Capabilities. They are one of the few races that can do so easily.

The Chromarans are an absolutist theocratic monarchy. The God-Emperor and his second in command, the Supreme Primarch are supposedly directly descended from their two gods.

The Chromaran economy is one of post-scarcity capitalism, any material want or need is simply produced via nanotech assemblers, barring a few non-reproduceable materials. They still have a system of stock trading, although its mostly for fun these days

The Chromaran Society is a deeply religious one. They follow the tenets set forth by their two gods. Halo, the Fox god and Runix, the Dragon god. Acording to their Creation myth, the two Gods created the Universe. In the beginning, Everything in existence was Chromaran, but The Unspeakable Evil appeared and disrupted the natural Harmony by leading parts of the Chromaran Populace Astray. The Unspeakable Evil created a Genetic parasite, the Female and used it to nearly wipe out the Chromarans by degenerating them into all the current races. This angered the Gods and they fought a long and utterly brutal Pan-Galatical War against it and it's underlings. But, Alas the Scourge of females and even Hermaphrodites at this point, whose fate had been worse then death, was too strong. So the two gods united into a singular being and promised that someday the saviour would arrive. This saviour is prophesiced to cleanse the Universe once and for all from The Unspeakable Evil and restore the natural Harmony, lifting the curse placed upon the Hermaphrodites and return all the males to their true form of Chromarans.

The political goal of the chromaran invasion is to convert highranking male government officials or if they are female push them out off power.

The First stage of the Chromaran invasion plan is to breed as much as possible with as many different partners as possible, moving as necessary to allay suspicion. Should they get into a position to forward their political, cultural, or technological agendas they are to take advantage if the risk is not too great.

Once the population of "hybrids" is over 50% of the population of the Earth they will petition the Galactic Council to declare Earth a territory of Chromar. If things are not going well, they are to push the proceedings to take as long as possible, allowing them to convert more and more of the Earth's population into Chromarans. In the end Earth will be theirs through an act of the Galactic Council, or because there are no uninfected humans left in existence on the planet.